Was the Margaret River bushfire caused by human activities? Recently, a serious bushfire raged near the Margaret River in Western Australia, and it had caused significant damage. Due to the unique geography and climate, bushfires are rather common in  Australia. The Margaret River bushfires are no exception. Although the cause of the fires has not been discovered yet, it is just like a Chinese saying goes "It's either a natural disaster or a man-made calamity".

Why are bushfires very likely caused by human activities? December is the peak holiday season for Australians, with many families planning road trips. That’s when those scenic spots become an ideal place for camping. Other than road trips, many people will also go picnic or barbecue, so as to spend time with their families.

However, many of those scenic spots in Australia are rather vulnerable to fires, due to the extremely dry air and heatwaves. Let’s not forget that people will use open fire when cooking in the wild. And when people are enjoying themselves, there’s a good chance that they will neglect the possible danger. Therefore, for those who like camping, strict precautions are needed.

Can people go elsewhere for their Christmas camping?

The Margaret River fire hasn’t been under full control yet. A detailed report will have to wait for the fire service to release. For the time being, we recommend that each family should prepare two sets of plans for Christmas: home or outdoor. If you’re staying at home, a BBQ will be a great idea. If you’re going outdoors, go to less populated areas if possible, and avoid camping near dry forests. Be sure to take precautions against open fires. 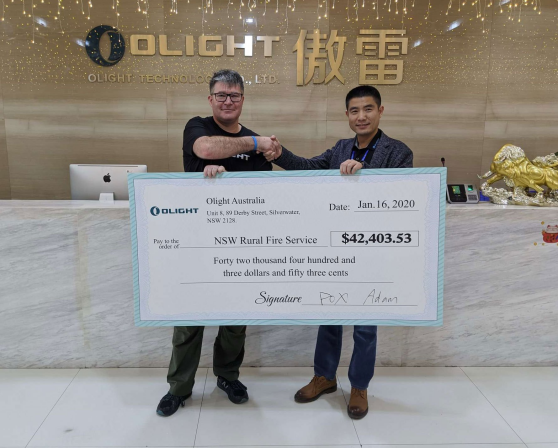 Facing frequent occurrences of fires around Australia, firefighters have put in lots of effort. They show up fighting those bushfires on the front line each time. We need to recognise their works and support them. In 2020, Fox (CEO of Olight) and Adam (head of Olight Au Branch) had issued a donation($42,403.53) to the NSW Rural Fire Service, to show support for firefighting in New South Wales. Olight has been closely following and supporting the national fire agencies ever since the Au Branch was established. We will continue to do so, that is, to follow the Margaret River fires, and host charity sales as well as fundraising events when needed.